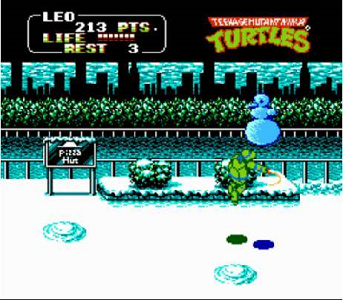 I've decided to try to catch up with the Teenage Mutant Ninja Turtles series, so even though I'd checked out the first release on NES just about a month ago, I thought I'd try out its sequel, also on NES, entitled Teenage Mutant Ninja Turtles II: The Arcade Game. The sequel is more in line with the bulk of the rest of the series, in that it's a straightforward beat 'em up with what I suppose you'd call a pseudo 3D, isometric perspective.

Anyway, the game features codes that greatly up the number of lives and also provide a stage select, so it didn't take much effort to barrel my way through most of the game. Unlike the first NES title, in this game the Turtles pretty much all have identical abilities. They're limited to just a handful of attacks: a regular attack, a hop + attack (executed by pressing the jump button and then immediately pressing the attack button), and a jump kick. There's not a whole lot of grunt enemy variety, although there are quite a few bosses and sub-bosses. The boss fights are very same-y (and, revealing the game's arcade roots, feel like they were designed to munch quarters), and although the game does introduce new hazards in pretty much every new stage, they're not enough to alleviate the tedium common to the genre and exacerbated here by the lack of enemy variety and player attacks, and the complete absence of power-ups.

All in all although I'm sure at the time players were excited to have a port of an arcade favorite, I found this to be fairly dull. I know I'm in a small minority here, but I would even rank this below the first NES game. At least that game had variety in terms of travelling around the overworld map and moving in directions other than just left to right. The games in the series that I'll be playing next are generally regarded as the pinnacle, so we'll have to see if my interest in the series improves at all.

Stroll through these Teenage Mutant Ninja Turtles II: The Arcade Game links:
- Complete playthrough on YouTube
- Entry at Wikipedia
- Sydlexia ranked this at #11 on their list of top NES games