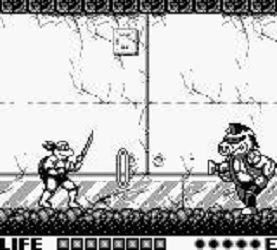 I thought I might as well continue my exploration of the Teenage Mutant Ninja Turtles series since the next one up was the Game Boy title Teenage Mutant Ninja Turtles: Fall of the Foot Clan and it looked to be a very straightforward affair. The game includes a stage select (although using it prevents you from seeing the true ending), as well as a code to refill your life meter at any time. At only five stages the game is very short, and I breezed through it with little thought using the stage select in less than half an hour.

The game is extremely simplistic and repetitive. The game is different from the two NES games that precede it, and is a completely straightforward left-to-right beat 'em up. Once again the four turtles represent your four lives, and this time the turtles have a special attack, which allows you to throw an unlimited number of shurikens by pressing down and B. Although the turtles themselves wield different weapons, there doesn't seem to be any advantage to choosing one or the other aside from the aesthetics. The sprites are large, but the enemy variety is very limited and boss fights are mindless. Although each stage introduces some new elements, it all feels very trivial and basic. To its credit the game came out only a year and a half after the Game Boy launched, and it's definitely at a higher level than the launch titles in terms of polish.

The game won Nintendo Power's Game Boy Game of the Year award in 1990, and seems to still be regarded with fondness today. Game Boy games were often designed to be easier than their NES brethren, and so it's hard to fault how easy this game was, but I was pretty bored. Having no nostalgia for the Turtles or this game I found this to be a completely forgettable experience, but I'm glad the playthrough only took half an hour and that I can cross this off my list.

Basic Teenage Mutant Ninja Turtles: Fall of the Foot Clan links:
- Complete playthrough on YouTube
- Review at NintendoLife
- Review at YAGRS
- Entry at Wikipedia
- Apparently there are bonus minigames scattered across the levels. I didn't come across any of them, but this walkthrough at GameFAQs lists some of them.