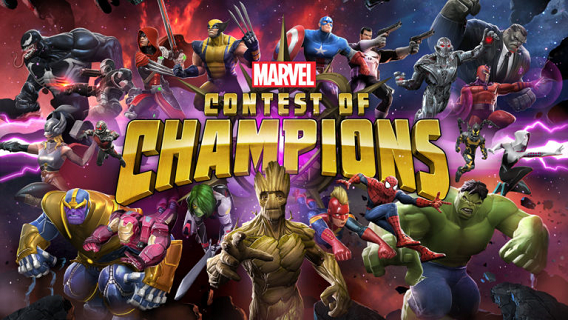 I definitely didn't need another mobile game to add to my daily rotation, but a friend of mine has been playing Marvel Contest of Champions regularly, and as a Marvel fan I thought I should check it out myself. The game was released almost five years ago (!) and, no surprises here, doesn't stray at all from its free-to-play-mobile-game genre. The game is a shallow fighting game in which you roll randomly for Marvel characters and level them up, although coming from Fire Emblem Heroes and other gacha games I was initially surprised that this one doesn't have any mechanism for you to promote your character from a lower star tier to a higher one. There's the requisite stamina system (called "energy" here) and meandering and completely forgettable stories, limited-time events, and a few modes beyond those such as a versus mode (against CPU-controlled characters levelled up by other players) and guild battles. The characters have different classes (e.g. mutant, mystic, etc.), each of which is strong and weak against another class, and there's a lot of text to wade through if you want to read up on all the ins and outs of the mechanics. The gameplay is really shallow, though, so it really doesn't require any mastery, and fighting is generally mindless (although Marvel takes the game a bit too seriously and holds real-life competitions to find the best players). I've definitely made good use of the auto-battling (a feature that unlocks after a fair amount of playing the game). There are cases where the CPU's auto-battling doesn't cut it and I have to do a few manual battles during a play session, but for the most part my daily investment in the game is pretty low and I just collect my daily rewards. If I were a bigger Marvel fan I would actually care about trying to roll for my favorite characters (the pull rates seem appallingly low), but since I don't the game sits firmly in that category of smartphone games I don't really care much about but still find myself logging into daily.

I haven't dropped a dime yet (and I doubt I ever will), and I recently hit level 30 and got my first five-star character. Marvel continues to churn out new characters on a regular basis, so this game will probably continue to chug along for a good long while. I probably should play this game less than I do, but for now I'm fine with continuing to auto-battle my way through to higher levels in order to add more characters to my stable.