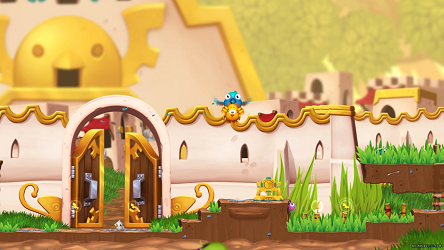 I'd really enjoyed the cartoony GBC puzzler Toki Tori years ago, and so I was very interested in its sequel, Toki Tori 2, when it was released on Wii U. The game didn't do as well as the developers had hoped, and even a significant revision to the game (which the developers dubbed "Toki Tori 2+") wasn't enough to interest enough of an audience to recoup the significant amount of effort that went into the game.

It's sort of easy to see why the game struggled to find an audience. Even I, a fan of the original, found myself disoriented and confused, and often frustrated, for the first few hours I played through the game. The game is so adamant about not holding your hand and hewing to its "no text" aesthetic, that this uniqueness ends up being a liability. The map itself is hard to follow at first, and I didn't realize that there was a built-in rewind mechanic (in the form of a song that the eponymous character can learn to sing) until a fifth of the way through, which was a huge handicap as I ended up stuck many times and having to reset. The game never teaches you that you can actually also do a rewind multiple times in a row. It's a bit puzzling how the developers were so stubborn in their auteur-like design that they lost touch with the audience (and in fact in the recent PS4 release the developers have finally added some text).

Anyway, that was the bad, but once I finally got over that hump, the rest of the game was pretty much consistently enjoyable. One of NintendoLife's main complaints was about the lack of a hint system, but in a way you could argue that the game fosters communication and is well-suited to Miiverse, Wii U's built-in social network, which has communities devoted to individual games (including one for this game, naturally) and the benefit of allowing you to post screenshots. There were a few places I got stuck and had to resort to looking up solutions, and a hint system would have been appreciated.

The game's central mechanics are novel and feel fresh. Unlike the first game, in this game Toki Tori doesn't use items but instead interacts with the animals in its environment. This is accomplished via just two abilities: whistling, to attract animals' attention, and stomping, to push them away. Studying the animals and observing how they interact with their environment and with each other is a lot of fun, and for the most part their behaviors feel natural and generally logical. The player and animal designs are great; the locations are varied; and the visuals and audio are relaxing. Some of the puzzles require some trial and error with the timing, but for the most part progression is a matter of brain power rather than thumb dexterity, as it should be.

I ended up enjoying the game so much that I was sorely tempted to add it to my list of "greatest games of all time".  The range of puzzles the developers have managed to create with such a tiny set of player abilities is amazing, and highly impressive. In the end, though, I felt like the game requires too much faith from the player. Even though for me enjoyment won out overall, the percentage of time I was feeling frustrated vs. actually enjoying the game was significant. I think I got about 80% of the collectibles, so I'm looking forward to revisiting this at some point, and also looking forward to their next game, a shooter called RIVE due sometime this year.