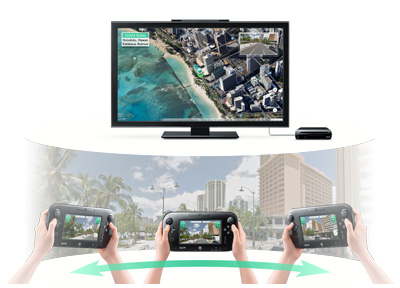 The Wii U freebie Wii Street U ended service yesterday, going the way of the dodo. It joins some noteworthy predecessors, such as Wii's Everybody Votes channel, which I had quite enjoyed and was sorry to see go. I hadn't really spent much time with Wii Street U aside from giving it a cursory glance, but I spent more time with it off and on over the past few weeks and thought I would jot down my thoughts.

Basically Wii Street U provides a souped-up interface to Google's Street View, something that I've also played with on occasion but usually given up on because the interface is lousy. Exploring real-world areas with the Wii U version is much easier, and has the added benefit of being able to use the Wii U gamepad to move the view around in real space however you like. I agree with NintendoLife's run-down that the main benefit to the app is the social aspect, and that most of what you can do with it just builds on and improves what you could already do with the regular Google Street View on a laptop or tablet. But there's definitely something to be said for a good interface, and the interface of Wii Street U gives a lot of options, including an extensive list of recommended locations, the ability to search and bookmark locations, and a handful of "walking tours" that download the images of the route in one go so that instead of a lag between images you see them in a steady playback, which is almost like watching a movie.

The app's developers rolled out new features to it over time. They added a scavenger hunt-like mode where you can search for a particular location based on a clue. Finding the exact correct location will cause a chime to ring, and hunting around with the gamepad will reveal a little cartoon character that you can then use as a Miiverse stamp. Tracking these down was entertaining, although sometimes figuring out the exact right place you should be standing was frustrating and I ended up giving up on a couple of them even though I was pretty sure I was in the right area. The music is nice and relaxing, and changes slightly based on what location you're currently looking at (e.g. added bell-like sounds in a snowy area, or drums in a savannah area). Another one of the features they added was an option to "walk around" the area using the Wii Balance Board. I preferred this mode as a way to be a bit more active, but this mode prevents you from using the gamepad to look around (and thus prevents you from tracking down locations in the scavenger hunt). This is understandable, since in the gamepad mode you're able to physically completely turn your body around, which is fairly incompatible with moving around on the Wii Balance Board. But it would've been nice to have had some version that let you do both.

Presumably they discontinued Wii Street U because of an expiring license and/or because of Google's own competing apps. The app released a few months after the release of Wii U, and the Wii U Panorama View videos were released not too long after. I alluded to this in passing in my 2015 end-of-year list, but I actually got to try out two of the four videos (the rickshaw tour of Kyoto and "Birds in Flight") last year. I didn't think they were worth a post by themselves, but they're actually very similar to Wii Street U, but with video instead of Street View images. Although they were a pleasant enough diversion, I agree with NintendoLife's assessment that it's baffling why Nintendo released the videos in anything other than HD, since the whole point is it for to be an immersive experience. This was one of my complaints about Wii Street U as well, since moving from one image to another was slow and loads a low-res image unless you stop to wait and have it load a high-res image. This makes the entire experience less immersive, but it's not a major complaint since the main benefit of it was less about immersion and more about sharing the experience with others. In those terms, as a living room experience with family and friends, Wii Street U succeeded, and although I didn't spend a huge amount of time with it, I was glad for the experience.

New links with a view for Wii Street U:
- Official site
- Iwata Asks interview
- Page for Wii Street U on Miiverse
- Original press release
- Locations of all hidden travellers