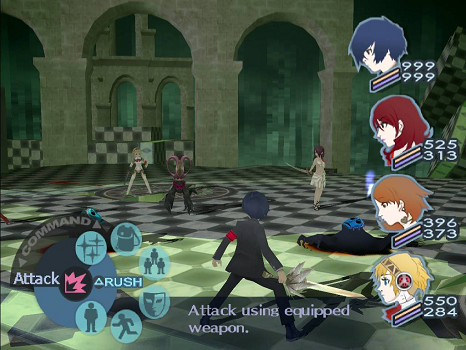 Persona 3 has been high on my list of games to play, even before the announcement that there was going to be a Shin Megami Tensei and Fire Emblem crossover. A friend of mine had raved about Its sequel, Persona 4, and I was intrigued by its Fire Emblem-like emphasis on building relationships. As is my wont, I had already dug into the roots of the series by first playing an older game, Shin Megami Tensei: Devil Summoner: Soul Hackers. I've actually also played large chunks of other games in the series as well, including the first Persona game, which I found to be terribly slow, and some of the mainline games.

Anyway, Persona 3 was a new direction even within the Persona series, and it feels like there's still room for improvement. I did enjoy the interactions with NPCs, but the rigid schedule of school, extracurriculars, and dungeon crawling got to be a real drag. The story is decent but not amazing, and the game introduces new characters that you can add to your party at a good rate. There are also some memorable moments, like a beach vacation between semesters. The main dungeon crawling, though, also gets to be a real chore, and ultimately that's what made me end up stopping less than halfway through the game. Using and collecting demons, called "personas" in this game, is fun, but the main dungeon itself is incredibly bland and every one of the randomly generated floors pretty much feels the same. Palette-swapped versions of enemies show up pretty early on, which is disappointing, and battles all play out in pretty much the same way. Boss battles do require more strategizing, but it's sort of annoying that there's no way to know for sure if you're levelled up enough in time for the next battle. The contemporary high school setting is a nice change of pace from most RPGs, and since it's set in Japan it feels exotic to non-Japanese players. The music is pretty good throughout, and the accompanying art style has a nice urban vibe as well. The sleek designs for the main personas are also worth mentioning.

I've actually already played a good chunk of that Fire Emblem crossover (entitled Tokyo Mirage Sessions ♯FE), and playing this game did prepare me for that game pretty well as the gameplay and aesthetics are very similar. I'll probably check out Persona 4 before going back to Tokyo Mirage Sessions, but overall I found Persona 3 to be a pleasant experience outside of the tedious battling, but not riveting.

Personable Persona 3 links:
- Thorough entry at megamitensei.wikia.com, although full of spoilers
- Some tips on your first playthrough at beforeiplay.com